Posted by Charles Turner at 4:59 PM No comments:

My vote belongs to me

Many online friends and adversaries are telling me 2020 is about getting Trump out of office. Period. The only priority. They make it as though the Democrats can put up any sh#t candidate of their choosing and I simply MUST vote the person in.

In the first place, getting the man out of the White House may be important, but it is not the number one necessity. Whoever replaces him has to make the decisions that will keep a second such ogre out.

Unfortunately, corporate Democrats have not that resolve. Bill, and the other, Clinton has turned the Democratic party into the poor cousin of the GOP. They get paid regardless how or who the government runs. They are putting roadblocks, as I write, to ensure the gravy train does not get derailed. They are backing the notion that Roosevelt's New Deal is radical and would be unobtainable, even if it made sense.

By now, the progressive reader will know exactly what I am on about and will need no further explanation. We know they seek to repeat the primary result of 2016. Whether or not they succeed in denying the progressive, one thing they have achieved with me: As Nixon and Reagan soured me on ever voting for another Republican, the Clintons have soured me on ever voting for another corporate Democrat. I would go Green before rewarding their criminality. It is as much their fault as the Republicans that we no longer have nice things.
Posted by Charles Turner at 2:30 PM No comments:

How the Democrats forfeit power to the right wing

Just a morbid note: if the right keeps pushing & pushing & DOES get Ilhan Omar (or someone else) killed, it won't spark some big collective break or wake-up moment. The right will just gaslight & dodge accountability & the media will both-sides it.
Put another way: whether it's incipient fascism, gun violence, climate change, or any other problem facing America, EVENTS will never make the left's arguments for it. Events do not speak for themselves. It's the ability to frame, interpret, & respond that matters.
And, just to finish the thought: the ability to frame, interpret, & respond does not come from possession of more or better empirical evidence. Reality, sadly, doesn't matter much. It's all about power. There's no substitute for a left comfortable with gathering & using power.
Dem leadership is constantly trying to be the Adults In the Room, trying to suck up to the referees, but THERE ARE NO MORE REFEREES. You don't get any points for being more civil or having more evidence; there's no one to give points. There's only the fight now.
And if you don't like the notion of fighting, you want to cling to the remnants of a world with referees, where evidence & arguments mattered, fine. You can have your virtue points. But just know you're prioritizing your aesthetic preferences over the future of the country.
-David Roberts
Posted by Charles Turner at 2:37 PM No comments:

Nuclear Option - Thanks in advance, Dan 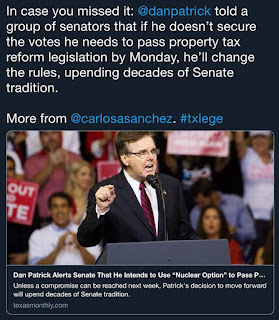 Posted by Charles Turner at 4:00 PM No comments: