Decline of an Empire 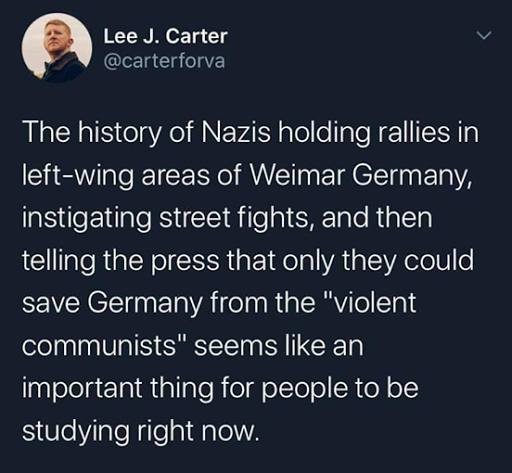 (W) An European voice: “Let me chime in with personal, brutally honest opinion. It's too late to study THAT in America right now. Now is the time to study a newer history. The history of Yugoslav wars of the 90s. That's the near future for "United" States of America and the society should prepare for that.
I had a Dutch TV journalist friend who covered Yugoslavia in the 90s... when we were "all" shocked that THIS happens in the late 20th century Europe.
One thing I remember is his footage and commentary that 30 men in 10 pickup trucks with automated weapons CAN terrorize a small town...
Guess what... we have enough pickup trucks in America... and there is enough hate within society as a fuel and enough ammo... there will be blood.”
Posted by Charles Turner at 9:14 AM No comments:

This video puts it out there in plain English

Posted by Charles Turner at 11:08 PM No comments:

Events have Been too Outrageous

Everything that happens almost every day defies rationality. Republicans follow the Looney up the yellow shit road while the Democrats decide they prefer to be the Republican party of Bush/Cheney, leaving actual Democrats without a party. Concerned voters have very little wriggle room and their right to vote is in dire straits. The government presides over a public that is rapidly losing the ability to sustain itself, occasionally gifting as much of the public's tax money to the super-rich and military as they can get away with, but crying poverty when asked if the people who actually own that money can be helped. Then the government prints itself as much increasingly phony money as it desires to feed the stock market. Call me cynical. Call me a false prophet of doom. The Greatest Depression of Them All must be waiting to waylay us in the months succeeding the election. The question to me is, "When push comes to shove, will our military wage war on the people or will it allow us to retake our country?"

Posted by Charles Turner at 1:39 PM No comments:

Dilan Cook
@dilanpcook
·
12m
never forget 9/11? we’ve lived in a surveillance state systematically eroding our civil liberties ever since. how the fuck could we forget?
No disrespect intended for its victims and heroes. - - C.T.
Posted by Charles Turner at 7:34 AM No comments:

Are You All Republicans Yet?

I have a family of rats in my home that I can't rid myself of. Three nights ago one caught its tail in my trap and the dog finished it off. Two nights ago another one set off a trap and although it escaped, it left four inches of tail in the trap. Last night still another one set off a trap but escaped. I am like the Democrats and the other Republicans, determined to ferret them out and end their quest for food and dignity. I will not rest until law and order is restored. I am prepared to destroy the cabinet they live under. I would shoot their heads with rubber bullets after macing them. And, yes, I would put a knee on their necks until they quit begging to breathe.

But they are destructive rats. What is the government's excuse for taking military action against their own people?

Posted by Charles Turner at 10:38 AM No comments:

One of the reasons Biden frightens me

Michael Moore
@MMFlint
·
16m
So the Biden campaign thought getting a few more White racist redneck votes in Michigan was more important than getting the Black vote in Flint? Better to embrace the mass-poisoning Republican ex-Governor than worry about “those Black people?” Are u nuts? Apologize & retract NOW.
Posted by Charles Turner at 1:17 PM No comments:

Our Hope in the Rigged System and one other video

The video's short, but worth seeing

Posted by Charles Turner at 1:42 PM No comments: